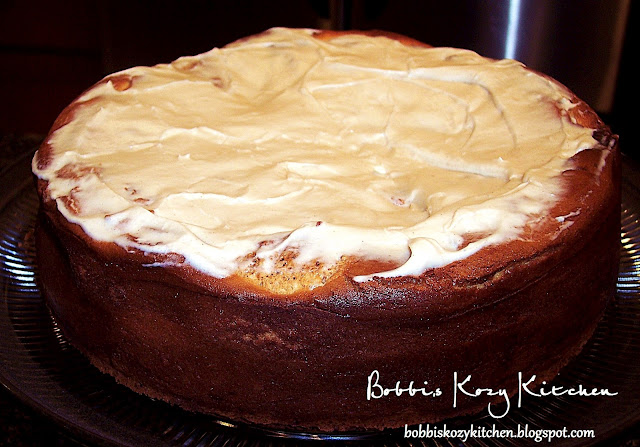 Oh my goodness, you have no idea how happy I am right now! #1 because, well, this is an amazing cheesecake! #2 I thought I had lost this photo and wasn't going to be able to post this until I made it again. Even though my mouth loves the idea of me making this again (and again and again) my waistline has put me on a limit of 2 or 3 of these a year. The reason? I become like a mother lion protecting her cubs, growling at anyone that comes near it trying to keep it all for myself. I am not a big sweets eater but this is one that I adore!
A friend gave me this recipe a few years back and at first I thought there is no way in heck this non baking girl is going to try that! But the idea of it just sounded so good. I mean cinnamon rolls and cheesecake? Two of my favorites in one place? Oh man I have to give it a try, what is the worst that can happen? *Note to self* I should never ask that question as many things have gone majorly wrong in my kitchen. Luckily this was not one of them.
Normally when I make cakes, pies, cupcakes, etc. they don't go very fast because there is just never anyone here anymore to eat them. This however was a whole different story. It was gone in one day! The next week it was requested again!! I laughed as I explained that we would all end up gaining 50 pounds if I made it every week. They begrudgingly agreed with me.
The following month it was again requested but this time it was going to a party so my waistline didn't have to stress. I was informed that the party goers were just as happy as the family had been. I had explained to my friend that the cake needed to be refrigerated if it wasn't eaten within the first couple of hours due to the cream cheese. She laughed as she told me that it didn't even make it past the first half hour! 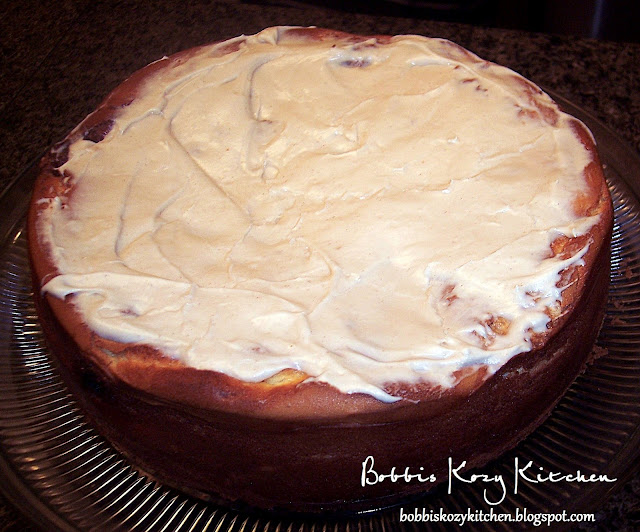 Cinnamon Roll Cheesecake
Cinnamon Roll Batter:
2/3 cup granulated sugar
1/4 cup butter, room temperature
1 egg, room temperature
1/2 cup milk
1 tablespoon vanilla extract
2 cups flour
2 teaspoons baking powder
1/2 teaspoon salt
Cheesecake Filling:
16-ounces (2 8-ounce packages) cream cheese, room temperature
1 cup granulated sugar
1 tablespoon vanilla extract
3 eggs, room temperature
Cinnamon Filling:
1/3 cup butter, melted
1 cup brown sugar
3 tablespoons ground cinnamon
Cream Cheese Frosting:
2 ounces cream cheese, room temperature
3 tablespoons unsalted butter
1 tablespoon lemon juice
2 teaspoons vanilla
1 cup powdered sugar
Milk (if needed to thin the frosting)
Preheat oven to 350 degrees F and spray a 9" springform pan with non stick spray.
For the cinnamon roll batter, use a stand mixer with the padded attachment or you can use a hand mixer. Cream together butter and sugar until it is light and fluffy, about 3 minutes. Add egg, vanilla, and milk. Beat for another minute, scrape the sides of the bowl.
In a medium bowl sift flour, backing powder and salt. Add the dry ingredients to the batter a little at a time. Mix on low speed until combined well. Spray your hands with non stick spray and spread half of the batter in the bottom of the springform pan making a thin layer. Don't worry it will rise when it bakes.
For the cheesecake filling beat the cream cheese and sugar, in a stand mixer or by hand, on medium for 2 minutes on medium-high speed. Add the eggs, one at a time, making sure to scrape the sides of the bowl with each egg. Add the vanilla and beat for another minute. Pour the batter on top of the batter already in the pan.
For the cinnamon filling, combine the melted butter, sugar, and cinnamon in a small bowl. Drop spoon fulls of the filling on top of the cheesecake filling. Top with spoon fulls of the remaining cinnamon roll batter. Using a knife to swirl the top of the cake. It will be thick, but just swirl as much as you can.
Bake for 50 to 55 minutes, until cake is puffy and lightly browned. remove cake from the oven and set it on a cooling rack. Allow cake to cool for at least 20 minutes. Cover and place in the refrigerator for 4 hours.
For the cream cheese frosting, combine the cream cheese and butter in your stand mixer or with a hand mixer, making sure your bowl is clean. Beat on medium for 2 minutes. Add the lemon juice, vanilla, and powdered sugar, beat for another minute or so until the ingredients are thoroughly combined. Add milk if the frosting is too thick. Spread the cream cheese frosting on the top of the cooled cheesecake and serve. Make sure to refrigerate leftovers.
ENJOY!!!