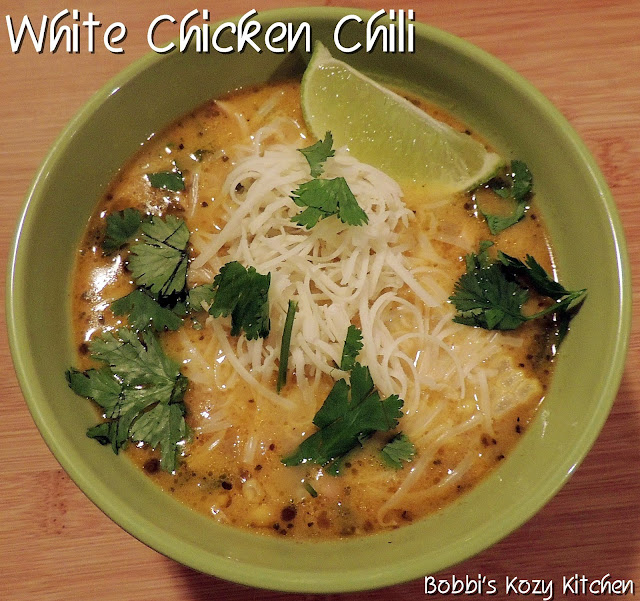 Chili season is upon us my foodie friends!
Can I get an AMEN?
I adore this time of year because I can indulge in as many soups, stews, chowders, and chilies, that I can slurp into my body.
It is cold, wet, and rainy here in Western Washington a good 8 months of the year,  and I love every minute of it.
I used to miss the sun, having come from San Diego many years ago, but now I have begun to miss my soup when the weather doesn't favor it. A foodie metamorphosis seems to have happened.
Or maybe it is the fact that I just don't seem to look as good in a bathing suit as I used to.
We will leave that debate for another day
and move on to the important stuff
THE CHILI!!
I wanted something thick and creamy and full of flavors. I have made chicken chilies in the past, but they were thinner and had a clear broth. This time I was craving crrrrrrrrrrrrreaminess in my bowl.
I had been watching Giada and one of her tricks to making a creamier soup, with out adding the fat of actual cream, is to puree beans and add them.
GENIUS right?
Thick and creamy but no guilt, love it!
I added a bit of Greek yogurt as well because, well because I love Greek yogurt. But also to add a tad more creaminess and that sour cream kind of flavor. You don't have to do that if you are avoiding dairy. The beans should still give you enough of that creamy feeling.
I just happened to make this on the coldest night to date here so far, and it definitely hit home for all of the right reasons.
So break out your soup pot and make yourself a big old bowl of this yummy goodness.
I guarantee you will love it.

Preheat the broiler.
Rub the poblano peppers with a bit of olive oil and place on a baking sheet under the broiler. Broil the peppers until the skin chars, turn the peppers and char the other side. Remove peppers to a bowl and cover with plastic wrap. Set aside and allow to cool a bit. The steam will help to lift the skin.
Once cooled, remove the peppers from the bowls and carefully remove the stem and seeds with your hand. Remove as much of the skin as you can. Leaving a bit of the char is OK. Dice the peppers.
Heat a bit of olive oil in a grill pan and char the corn on all sides. Remove the corn to a plate and allow to cool. Over a clean dish town, cut the kernels off of the cob with a sharp knife (the towel will help keep the kernels in one place).
In a large pot or dutch oven, heat the olive oil over medium-high heat. Add  the shredded chicken. Brown chicken slightly. Then add the onion to and cook until the onion is translucent, about 5 minutes. Add the garlic and cook for an additional minute, then add the cumin, Mexican oregano, coriander, chili powder, and cayenne pepper. Stir, cooking for 2-3 minutes longer. Add chicken broth, and poblano peppers, season with salt and pepper to taste. Bring mixture just to a boil then reduce heat and simmer 15 minutes.

Add the Greek yogurt and stir until combined. Stir in corn, and the 2 can's of Cannellini beans, then process the remaining can of beans beans along with 1/2 cup broth from the soup in a food processor until pureed, add bean mixture to soup. Simmer about 15 minutes longer. Mix in fresh lime juice and adjust seasoning if necessary.