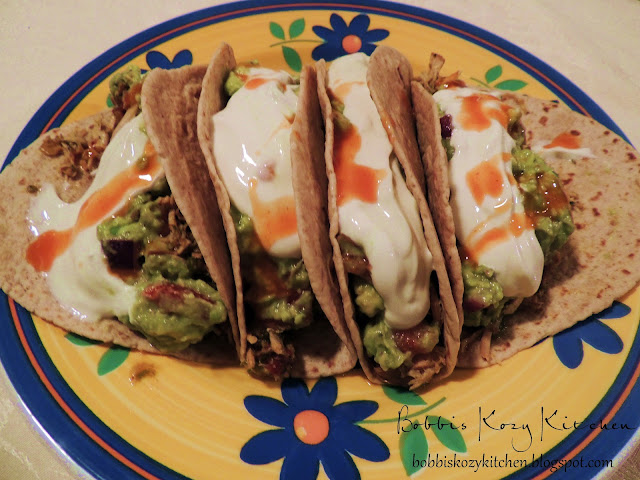 I have had so many people asking for slow cooker recipes. But with the kids moving out and it just being the two of us here,  my slow cooker has been sadly neglected. As a matter of fact when I went into my pantry to get my slow cooker, I couldn't find it! I hadn't used it since we moved several months ago. I finally found it down on a bottom shelf, all by it's self, lonely and neglected. Poor thing! Right then I vowed to try and do a slow cooker recipe at least once a month.
Wow I sound like a complete nut job right now don't I? YIKES! Anyway, moving on....
I know I have gone on and one about my love for Mexican food, and the fact that Kevin does not share my affection. So long story short, I love it, he suffers through it for me. End of story. Poor guy had to have it three times this week though. He must really love me!!
I will say that, in my defense, he walked in the door after work and the first words out of his mouth were "What smells so good"....he couldn't argue with me after that. Chalk one up for Mexican food and me!!
This is a great recipe and can be easily doubled for more people. I used two good sized chicken breasts and Kevin and I agreed that it would have easily fed four people. I also only used one jalapeno (left the seeds in) and it was not hot at all. Next time I will use at least two.
I also love this recipe because it takes 8 hours (can be shorter if you cook on high) so for people that work full time it is great. You don't have a meal sitting in your slow cooker on warm for three hours.
You can top the tacos with whatever you like. I used my guacamole, sour cream, and some Chalula hot sauce.
Slow Cooker Chicken Tacos
2 boneless skinless chicken breasts
1 15-ounce can diced tomatoes
1 jalapeno, chopped
1/2 small onion, chopped
2 cloves garlic, minced
1 good sized handful fresh cilantro leaves, chopped
1 tablespoon cumin,
1 tablespoon chili powder
Salt and pepper
juice of 1 lime
1 cup chicken stock
Optional topping:
Guacamole
Sour cream
Hot sauce
Place the chicken in the crock pot. Add the tomatoes, jalapeno, onion, garlic, cilantro, cumin, chili powder, salt and pepper, lime juice, and chicken stock.
Cook for 4 hours on high, or 8 hours on low.
Serves 4
ENJOY!!