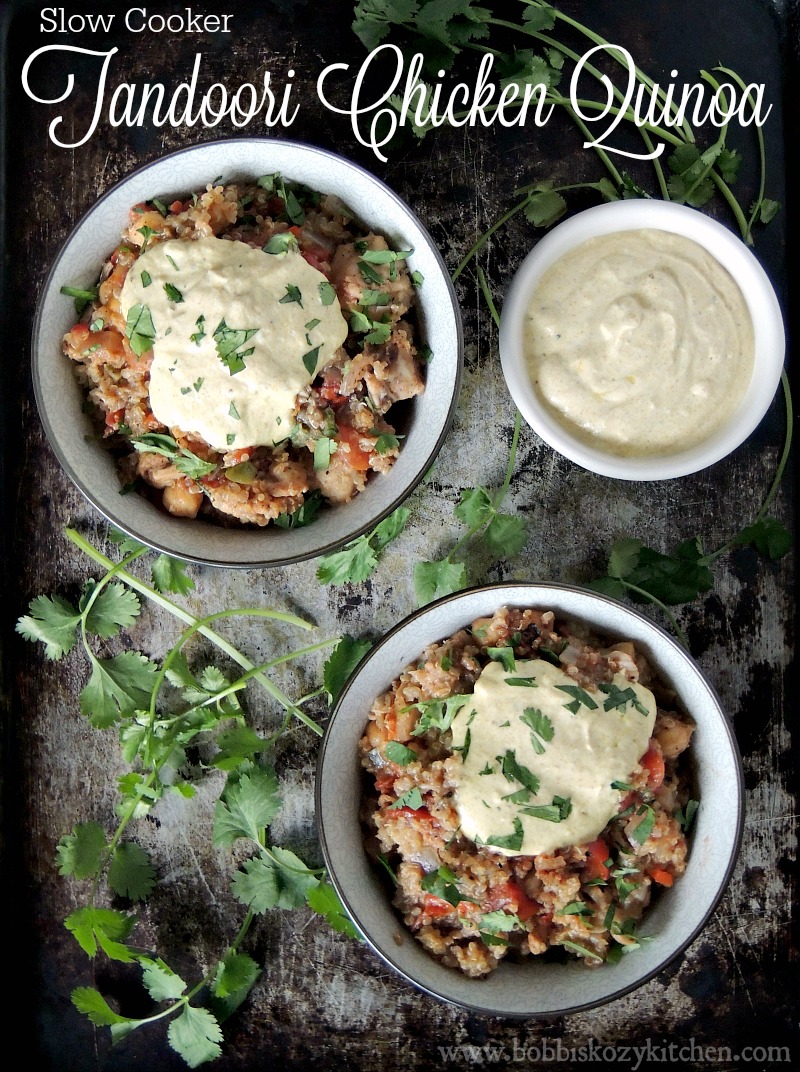 I am so just so excited!
I think I might explode

Kevin and I have been talking about adding to our family for a bit now. But it just never seemed like the right time.
He worked nights for a couple of years, so we didn't get to spend time together very often. Then I got so wrapped up in trying to improve the blog for y'all that it seemed like I was alllllllways working, and had no time for anything else.
Then my son and his fiance got pregnant and we all wanted to focus on their little one coming.
Buttttttt, we decided it was finally the time to hear the pitty pat of new feet in our home

So,
without further adieu,
Let me introduce you to the newest member of our kozy family,
ROCKY! 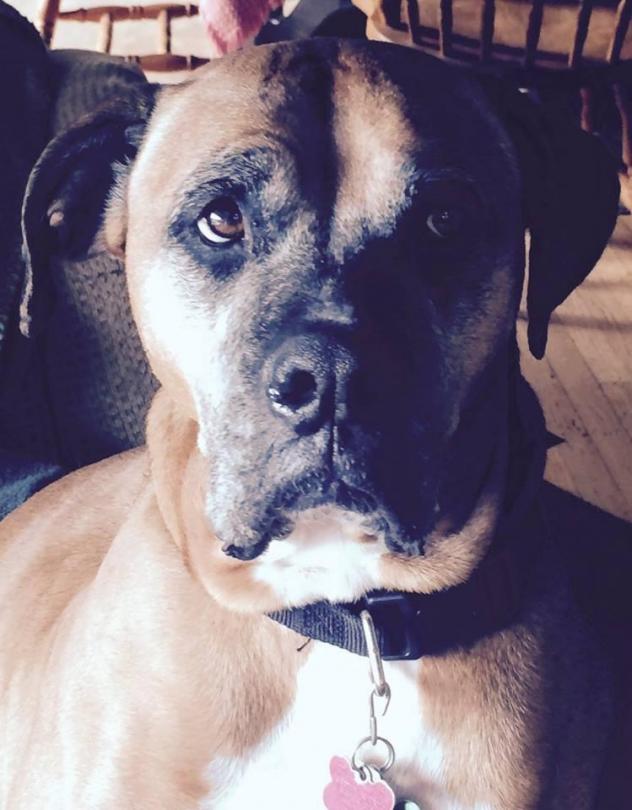 It might just be me, but I think that is the handsomest face I have seen in a long time. I mean, look at those eyes!!
Rocky is a 6 year old boxer mix that came from the Northwest Boxer Rescue. They are a wonderful organization, with foster homes all over the northwest. They rescue dogs from places as far away as Texas and California, but are based up here in the Pacific Northwest.
We drove to Hood River, Oregon to meet Marcia, Rocky's foster Mom, and of course Rocky. We had fallen in love with that gorgeous face, and big brown eyes, but we weren't sure how Rocky would feel about us.
You see the first half of Rocky's life was less than perfect, so he is a bit of a reserved boy. His foster Mom said that, when he came to her, Rocky had no idea how to play, and wouldn't give kisses. But she was so patient and loving with him, that he was finally starting to come out of his shell.
We stood in the pouring rain to meet him, and walk him around a bit, we felt an instant connection! Then we signed the papers, and away we went. It was a 4 hour drive back, so we were a bit worried that he might stress out. We could tell it was hard for him to watch Marcia walk away, and it broke my heart to see her, as well as Rocky, feeling that sense of loss. She cried, Kevin cried, I cried, but we all knew that he was going somewhere that would be filled with love and happiness

By halfway through the trip, Rocky was sound asleep in his new bed. We were so happy to see him relax like that.
We stopped at my son's work to let him say a quick "Hi" to his new "little brother", and snap a quick pic. 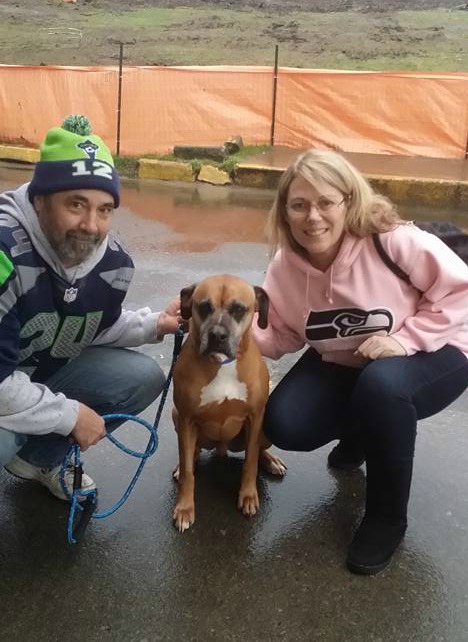 Then we headed home

to get him settled in. We were a teensie bit worried that our other dog Angel, who is 11 years old and blind, would be a little uncomfortable with him at first. She really hasn't been around very many dogs since our last boxer passed away a couple of years ago. She grew up with him, and took his loss very hard. Since then, she has been a bit grumpy with other dogs.
But nothing could be further from the truth! She immediately took to him, and started following him all over the house. She would sit up in front of him as if she was saying "Play with me, play with me"! It was the cutest thing ever. I haven't seen her do that since Barney passed. It seemed that things, on that front, were going to turn out fine, and we breathed a sigh of relief.
But, how long would it take for Rocky to feel comfortable with us, and feel like this was home?
Well, that question was answered in about 45 minutes. 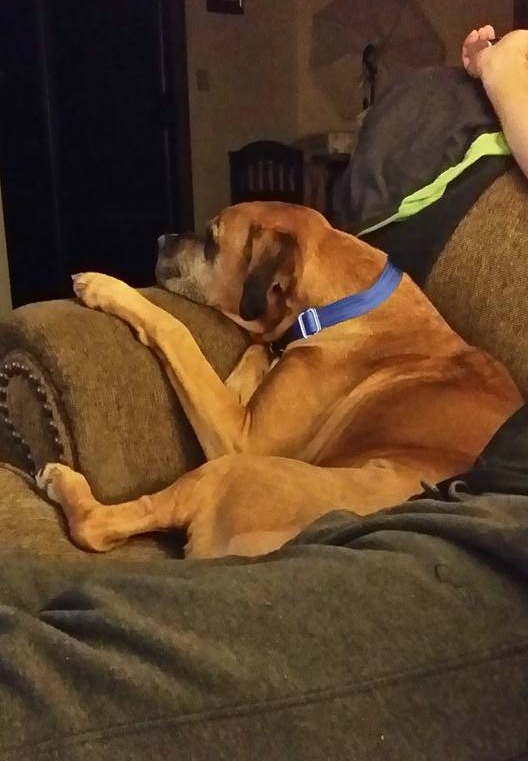 Up he hopped into Dad's chair, snuggled in, and watched TV. He even ended up snoring!
A little inside info, up until Rocky got here, Kevin had a strict no dogs on the furniture unless there was a blanket down policy.
HA, that went riggggggggggggght out the window! Rocky is now even sleeping in the bed with us

it is good thing we have a king sized bed!!
All I can say right now is that our hearts are so full, and we can't wait to see what the future will bring for our new family. I know it will bring lots of cuddles and kisses though because, as I write this, Rocky is laying next to me on the sofa, and just gave me kisses 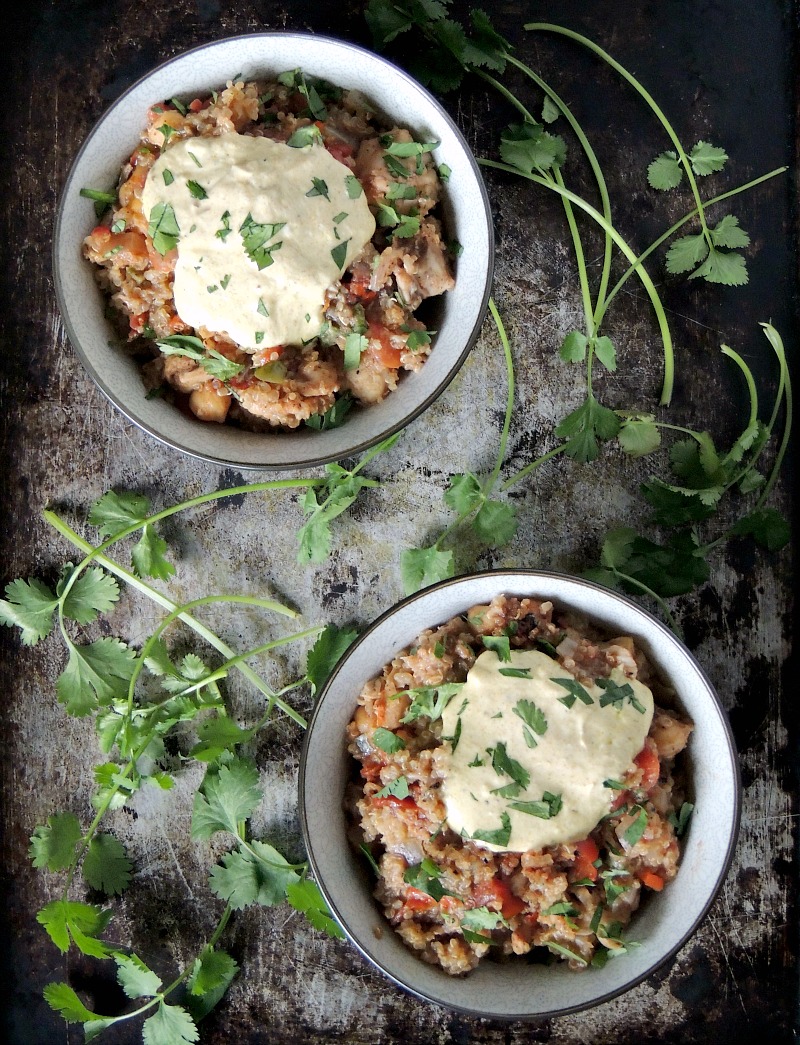 Ohhhh, ummm, where was I?
Oh the food!
Dang, I almost forgot to tell you about this amaaaaaazing meal

Now, before you can say it, yessssss Tandoori Chicken is usually made in a tandoor, or baked in a regular oven, so I am using the term loosely, based more on the flavors of the dish. And believe me, those flavors are really, reallllllly good! 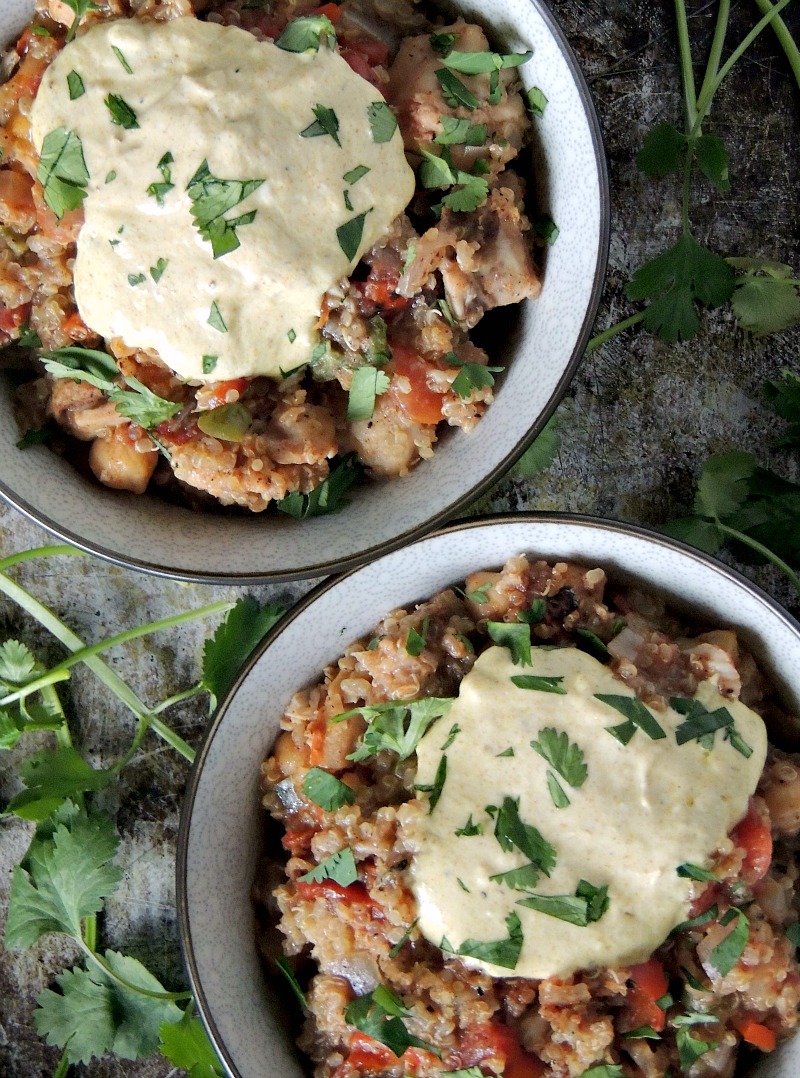 The idea actually came from many of you. I have gotten messages and emails saying how much you liked the Slow Cooker Chicken Enchilada Quinoa, and how much you would love more twists on ethnic dishes using the slow cooker and quinoa.
So I put on my little thinking cap

(OK maybe it's not so little), and really thought about what flavors really seemed to be favorites. BUT, then I decided to come out of left field

and go with something I really haven't posted many recipes of, Indian inspired dishes.
I think the only one I have is my Naanchos, which we, well everyone but Kevin, fell head over heels in love with. They really are a show stopper when you want to serve an appetizer that no one has ever had before.
But this, oooohh this. It made my heart

, and tummy, so very happy

!
Even better, Kevin grabbed a bowl so fast it  made my head spin, and by the time I was done taking photos, it was empty and he was going back for more!!
Yay!! Slow Cooker Tandoori Chicken Quinoa FTW!! 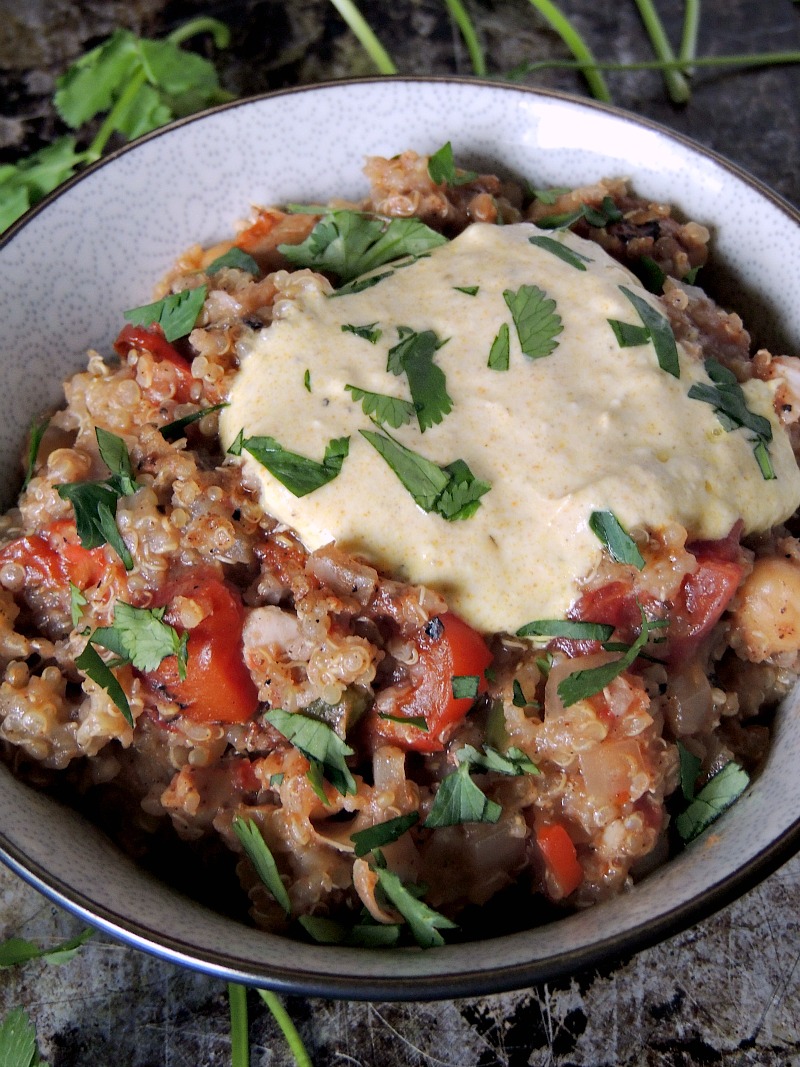 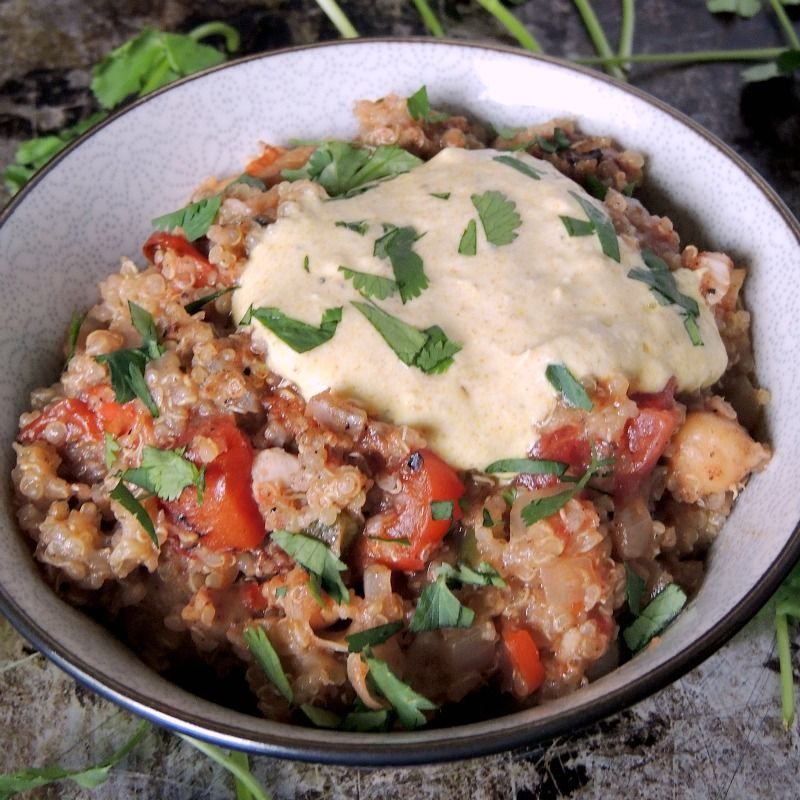 A healthy, delicious Indian inspired meal, made easy with the use of your slow cooker. 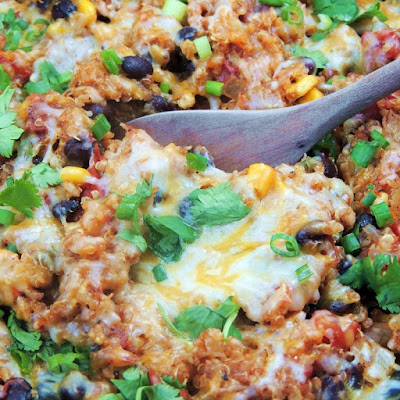 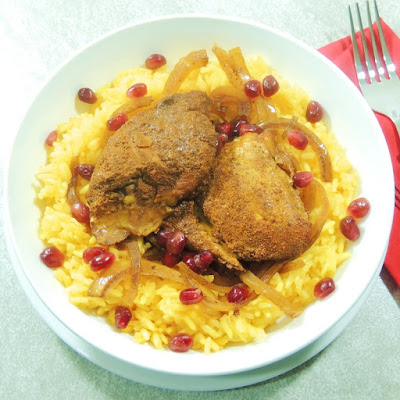 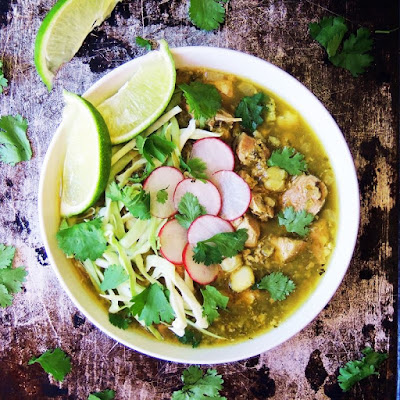 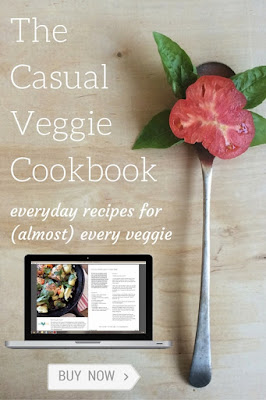 Do You Shop Amazon?

Help support this blog by starting your Amazon shopping here. THANK YOU!!

Planning on making one of my recipes? Nothing would make me happier! Take a photo and share it on Instagram using the hashtag #BobbisKozyKtchn I would love to see what you made.