This Slow Cooker Holiday Ham recipe is the easiest holiday recipe ever! With just 5 ingredients, it is the perfect set it and forget it holiday dish. This is a recipe that your family will look forward to each and every year! Keto adaptations and nutritional information are provided. 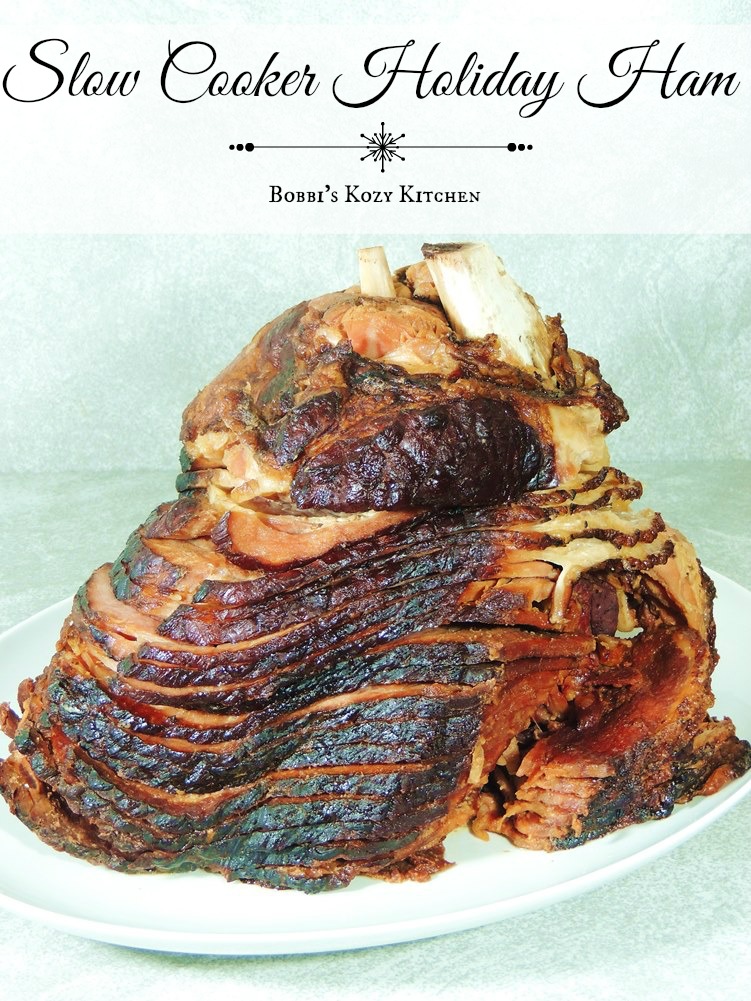 Oh boy is my slow cooker getting a work out this year! I have been determined to come up with more recipes to use it for.
Especially being a food blogger, I am game for anything that takes some work off of me and helps relieve some stress.
Why did I not focus on this before?
Ok, so I am a little slow, but I get there!
My only issue now is, I wish I had more slow cookers!
HA!
It used to be the one I have would gather dust in the pantry most of the year.

Ya, I would drag it out in the winter a few times to make soup or a roast (same old boring stuff), but now I am making Easy Creamy Slow Cooker Green Chile Chicken Tacos, and Mississippi Pot Roast, Homemade Pumpkin Puree, and even Slow Cooker Queso Blanco in my slow cooker!
Then along come the holidays and my slow cooker has become golden!

I have been cooking up a storm in it and love every minute of it.

But mine is sooooo old. I don't even remember when I bought it, it was that long ago. So I did in a request to the big guy for a new one. I mean I have been a very good girl this year, I think I deserve it, don't you?

This year I have made several holiday meals.

Between trying to balance time with all of our kids, and wanting to get things together for the blog, I feel like it has been one long holiday meal since the middle of last month!

We are even going to smoke a rib roast on Christmas Eve YUM!!!

But I was super excited to do the ham in the slow cooker. No touch, no stress, and make the house smell amazing? Oh heck ya!!

This was one of those dishes that woke Kevin up because it smelled so good.

He about scared me to death when he stumbled into the kitchen, all zombie-like, mumbling, "What smells so good?".

I told him it was a ham, but that it wouldn't be done for a bit. So he stumbled back upstairs, only to stop and ask me if I was going to save the ham bone to make soup with.

Huh? You are half asleep and the ham bone is what comes to your mind?

WOW, I thought I was weird!

I assured him that there would be a nice big pot of my ham and bean soup on our stove in the very near future! 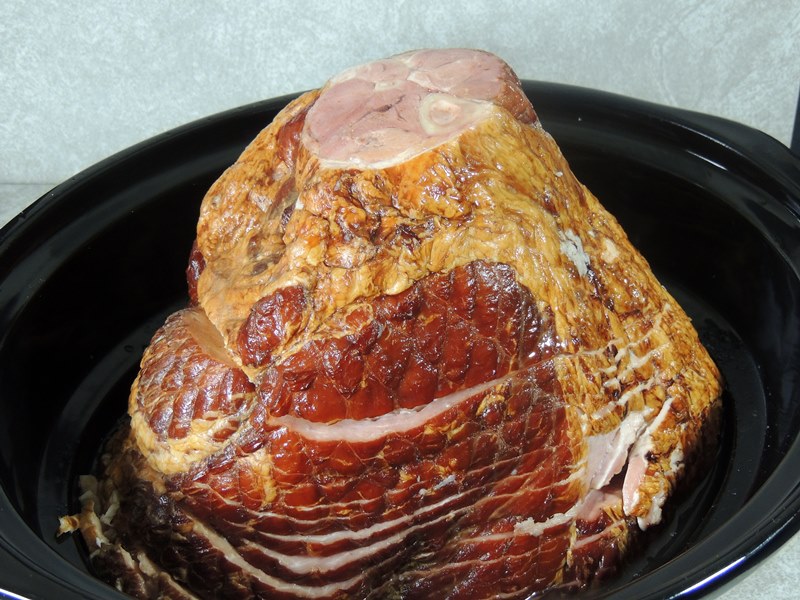 WHAT DO YOU NEED TO MAKE SLOW COOKER HAM? 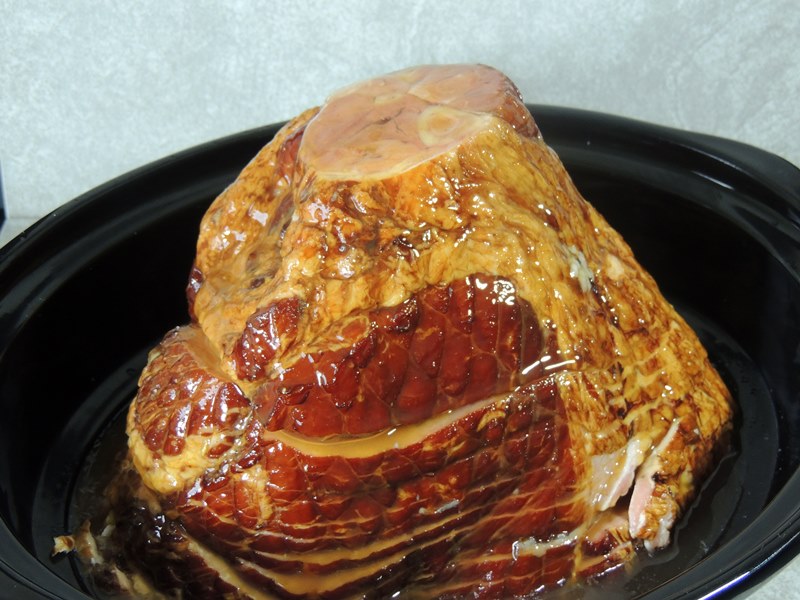 WHAT KIND OF HAM WORKS BEST IN A SLOW COOKER?

The ham that you buy at the grocery store is already cooked, so you are basically heating it and infusing flavor in the slow cooker.
You can use just about any kind of ham (providing it fits into your slow cooker). Boneless, bone-in, whole, spiral cut, go for it!

The typical ham at your grocery store will be cured but not smoked, although you can choose cured or uncured, plain or smoked. It is just a matter of personal taste.

If your ham includes a flavor or glaze packet, or if it has a plastic cap over the end of the bone, be sure to discard those before cooking!

WHAT SIZE HAM DO I NEED?

The size of the ham you buy depends on how many people you are going to feed. The general rule of thumb is 3/4 pounds (of bone-in) ham per person. I would only recommend up to an 8-pound ham as the size that will most readily fit in a large oval crockpot.

If you put your ham in the crockpot and the lid won’t fit, you have a couple of choices. You can either trim your ham to make it fit, or use heavy-duty foil to cover the slow cooker with a tight seal. Just be careful of the steam when you remove the foil.

HOW LONG DO I COOK A SLOW COOKER HAM?

The FDA recommends reheating a fully-cooked ham to an internal temperature of 140 degrees F.

A small ham could reach that point in 2 to 3 hours. A large ham should get to temp in 4 to 6 hours on low. Just remember that each time you remove the crock pot’s lid, you will have to compensate for lost heat with a bit of additional cooking time.

As with most cuts of meat, bone-in ham is likelier to stay juicy. A spiral-cut ham is convenient for serving but it can dry out a bit faster than an uncut ham. That is why this recipe calls for some basting. 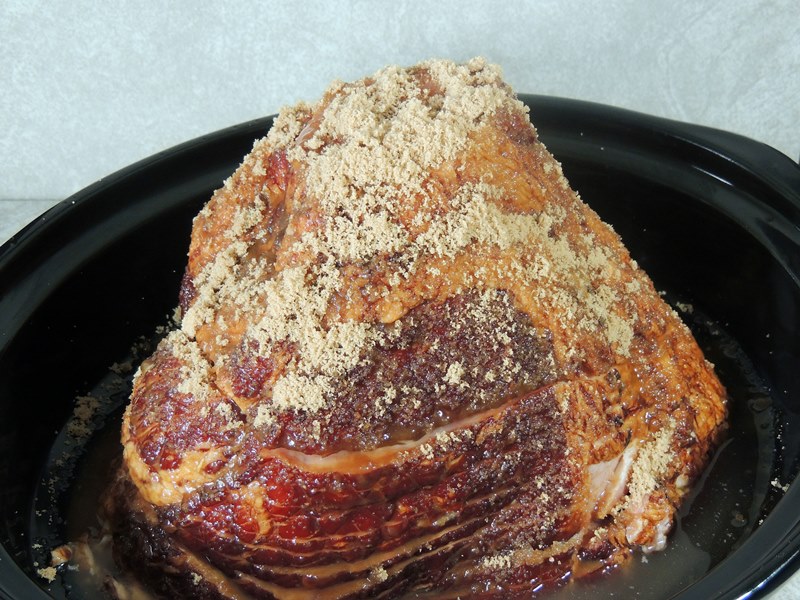 WHAT CAN I SERVE WITH MY SLOW COOKER HOLIDAY HAM? 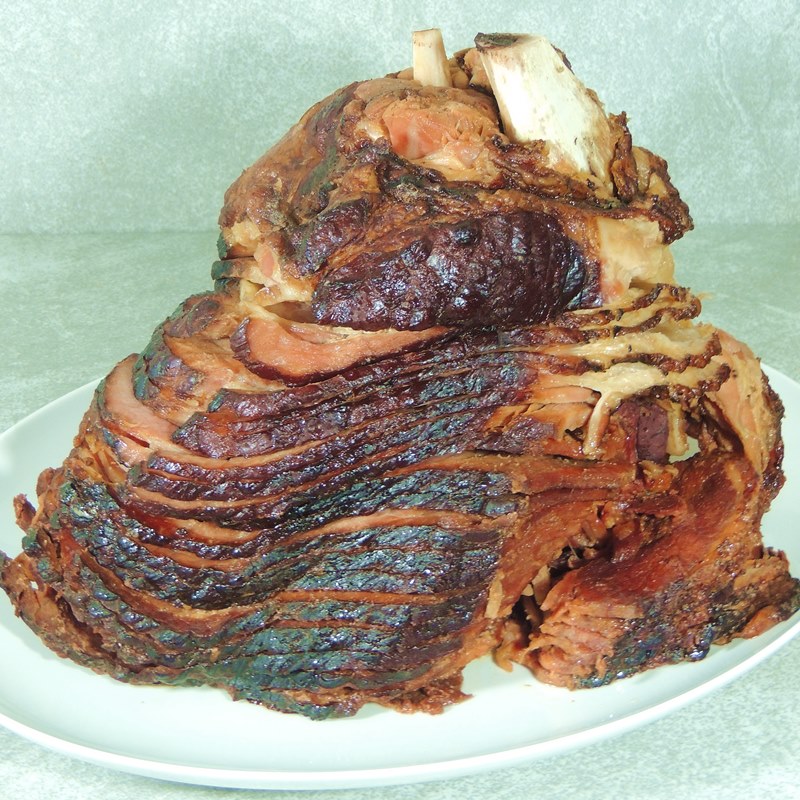 Yield: 10 servings (based on an 8 pound ham)
Author: Bobbi Hass-Burleson
prep time: 10 Mcook time: 5 hourtotal time: 5 H & 10 M
This Slow Cooker Holiday Ham recipe is the easiest holiday recipe ever! With just 5 ingredients, it is the perfect set it and forget it holiday dish. This is a recipe that your family will look forward to each and every year! Keto adaptations and nutritional information are provided.

The nutritional info provided is for the keto version of this recipe.
Calories
502.77
Fat (grams)
13.15
Sat. Fat (grams)
13.01
Carbs (grams)
4.98
Fiber (grams)
2.13
Net carbs
1.66
Sugar (grams)
0.03
Protein (grams)
65.62
Sodium (milligrams)
127.02
Cholesterol (grams)
0.00
Nutritional information is provided as a courtesy and is approximate only. We cannot guarantee the accuracy of the nutritional information given for any recipe on this site. Erythritol carbs will not be included as it has a glycemic index of 0 (meaning it does not spike blood sugar) and it's not metabolized. Net carbs are the total carbs minus fiber.
All recipes and their respective images are original and the sole property of Bobbi's Kozy Kitchen ©, with all rights, reserved.
Holiday Recipes, Keto, Low Carb, Easy Recipes, Pork,
Slow Cooker
American

Did you make this recipe?

Snap a pic and tag @BobbisKozyKtchn on Instagram and hashtag it #BobbisKozyKtchn You might even make it into our newsletter!
Created using The Recipes Generator

Thank you for reading and supporting the companies I partner with. Doing so allows me to create more unique content and recipes for you.

This post contains affiliate links. As always, all opinions are my own.